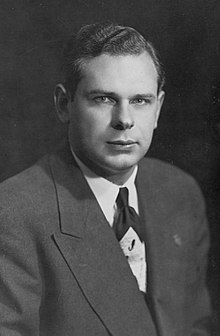 First elected as a Liberal in 1949 federal election in the riding of Davenport, he was the youngest person ever elected to that point in the House of Commons of Canada. He served a brief stint as Parliamentary Assistant to the Minister of National Defence, and made a good impression. He was then named Associate Minister of National Defence in the cabinet of Prime Minister Louis St. Laurent. This post was short-lived, though, as Hellyer lost his seat when the St. Laurent government lost the 1957 election two months later.[citation needed]

Hellyer returned to parliament in a 1958 by-election in the neighbouring riding of Trinity, and became an effective opposition critic of John Diefenbaker’s Progressive Conservativegovernment.[citation needed]

When the Liberals returned to power in the 1963 election, Hellyer became Minister of National Defence in the cabinet of Lester B. Pearson. This was the most significant period in Hellyer’s political career. As Minister of Defence, he oversaw the drastic and controversial integration and unification of the Royal Canadian Navy, Canadian Army, and the Royal Canadian Air Force into a single organization, the Canadian Forces.[citation needed]

Hellyer contested the 1968 Liberal leadership election, placing second on the first ballot, but slipped to third on the second and third ballots, and withdrew to support Robert Winters on the fourth ballot, in which Pierre Trudeauwon the leadership. He served as Trudeau’s Transport Minister, and was Senior Minister in the Cabinet, a position similar to the current position of Deputy Prime Minister.[citation needed]

In 1969, Hellyer issued a major report on housing and urban renewal in which he advocated incremental reforms rather than new government programs. He called for greater flexibility in Canada’s mortgage loan system, and encouraged corporate pension funds to invest more money in housing programs.[3] His approach did not meet with universal acceptance. Some provincial and municipal governments were openly skeptical,[4] and Heward Grafftey, a left-leaning Progressive Conservative with an interest in housing, called for a more radical approach.[3]

Hellyer’s report also called for the suspension of the “wholesale destruction of older housing” and for “greater selectivity… in the demolition of existing houses”.[5] Grand urban renewal projects would come to an end as a result of his Task Force. Hellyer resigned from cabinet and the Liberal caucus in 1969 over a dispute with Trudeau over the implementation of the housing program.[citation needed]

Hellyer sat in Parliament as an independent for several years. After his 1971 attempt to form a new political party, Action Canada, failed, Progressive Conservative leader Robert Stanfield invited him to join the PC caucus. He returned to prominence as an opposition critic and was re-elected in the 1972 election as a Progressive Conservative. He lost his seat, however, in the 1974 election.[citation needed]

Despite this loss, Hellyer contested the PC leadership election of 1976. His views were too right wing for most delegates, and alienated many Tories with a speech attacking Red Tories as not being “true conservatives”. He finished a distant sixth of eight contestants on the second ballot; Joe Clark won the leadership.[citation needed]

Hellyer rejoined the Liberal Party in 1982, but remained mostly silent in politics. In 1988, he contested the Liberal nomination in the Toronto riding of St. Paul’s, losing to Aideen Nicholson, who had defeated Hellyer 14 years previously when he was a Tory MP in the adjacent riding of Trinity.[citation needed]

In 1997, Hellyer formed the Canadian Action Party (CAP) to provide voters with an economic nationalist option following the collapse of the National Party of Canada.[6] Hellyer believed that both the Progressive Conservative and Liberal parties were embracing globalization, and that the New Democratic Party was no longer able to provide a credible alternative. CAP also embraced Hellyer’s proposals for monetary reform: that the government should become more involved in the direction of the economy by gradually reducing the creation of private money and increasing the creation of public money from the current ratio of 5% public / 95% private back to 50% public and 50% private.[7][8]

His party remained a little-noticed minor party, and Hellyer lost bids for a seat in the House of Commons of Canada in the 1997 and 2000 elections.[citation needed]

Following the 2000 election, and a resurgence for the New Democratic Party, Hellyer approached NDP leadership to discuss the possibility of merging the two parties into ‘One Big Party’. This process was furthered by the passage of a unanimous motion at the CAP’s convention in 2003.[citation needed]

In early 2004, after several extensions of the merger deadline, the NDP rejected Hellyer’s merger proposal which would have required the NDP to change its name. Hellyer resigned as CAP leader, but remains a member of the party. Rumours that he might run for the NDP in the 2004 election proved to be unfounded.[citation needed]

On 3 June 1967, Hellyer flew in by helicopter to officially inaugurate an unidentified flying object landing pad in St. Paul, Alberta. The town had built it as its Canadian Centennialcelebration project, and as a symbol of keeping space free from human warfare. The sign beside the pad reads:

The area under the World’s First UFO Landing Pad was designated international by the Town of St. Paul as a symbol of our faith that mankind will maintain the outer universe free from national wars and strife. That future travel in space will be safe for all intergalactic beings, all visitors from earth or otherwise are welcome to this territory and to the Town of St. Paul.[9]

In early September 2005, Hellyer made headlines by publicly announcing that he believed in the existence of UFOs. On 25 September 2005, he was an invited speaker at an exopolitics conference in Toronto, where he told the audience that he had seen a UFO one night with his late wife and some friends. He said that, although he had discounted the experience at the time, he had kept an open mind to it. He said that he started taking the issue much more seriously after watching ABC‘s UFO special in February 2005.[citation needed]

In 2007, the Ottawa Citizen reported that Hellyer is demanding that world governments disclose alien technology that could be used to solve the problem of climate change:

I would like to see what (alien) technology there might be that could eliminate the burning of fossil fuels within a generation…that could be a way to save our planet…We need to persuade governments to come clean on what they know. Some of us suspect they know quite a lot, and it might be enough to save our planet if applied quickly enough.[10]

In an interview with RT (formerly Russia Today) in 2014, characterised by Yahoo News as “sadly hard to take seriously”, Hellyer said that at least four species of aliens have been visiting Earth for thousands of years, with most of them coming from other star systems, although there are some living on Venus, Mars and Saturn’s moon. According to him, they “don’t think we are good stewards of our planet.”[11]

Hellyer currently resides in Toronto. He has three children and five grandchildren.[citation needed]

Hellyer has written several books on Canada and globalization, including One Big Party: To Keep Canada Independent, in which he promoted the merger of the CAP, NDP, and various left-wing activists to save Canada from the effects of globalization, as well as possible annexation by the United States.[citation needed]